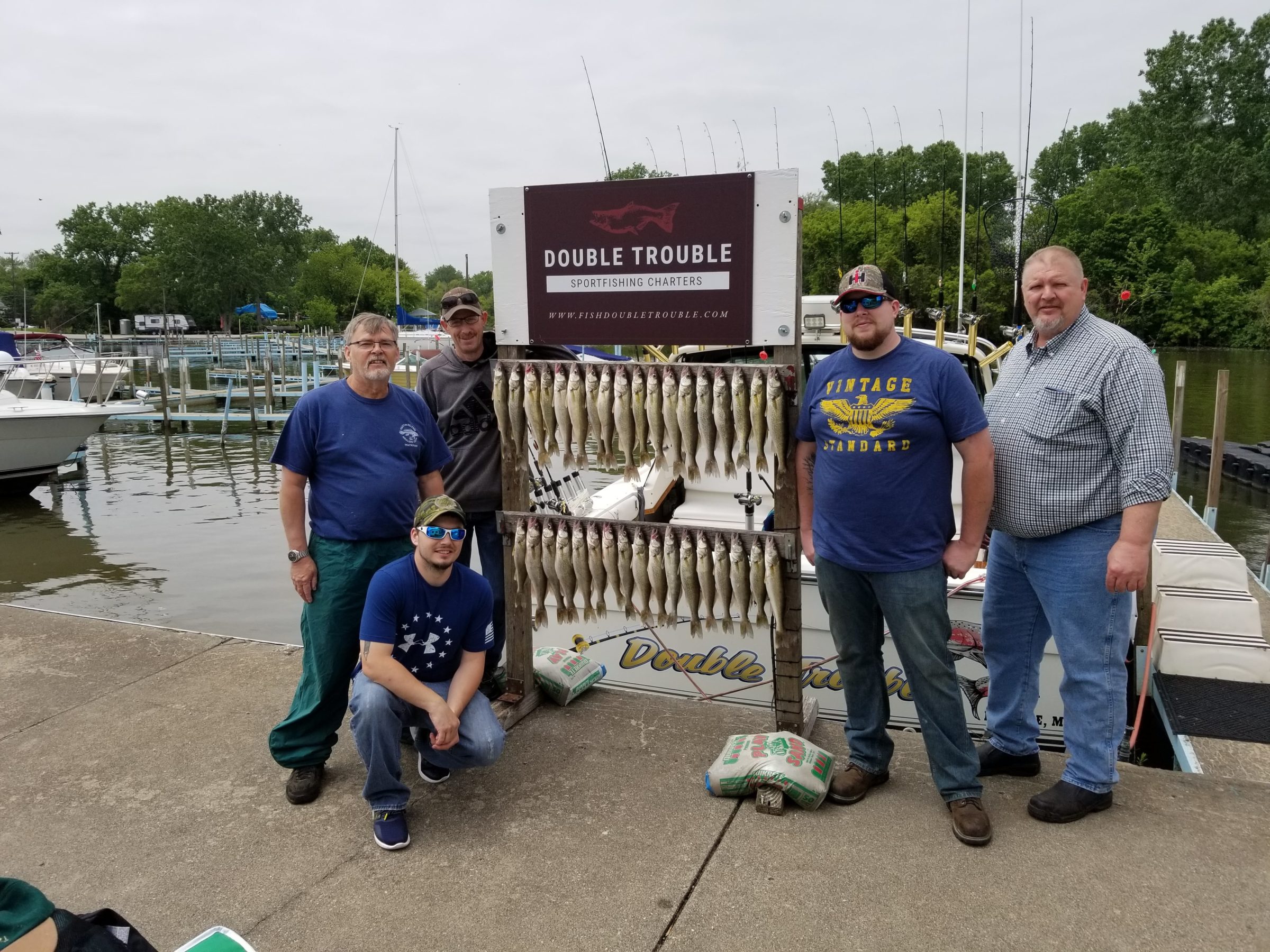 Well everyone around Lake Erie knew it was coming.

2018 was supposed to be the ‘big’ year for walleye on Lake Erie. And it did everything but disappoint.

We had seen it first hand in the preceding seasons. We all had handled countless undersized walleye from the booming hatches of 2014 and 2015. 2018 was the year that everything came together.

Limit catches of walleye were coming in short order from across Lake Erie. Fishermen were high fiving on docks all down the lakeshore as they experienced action not seen since at least the 2006 fishing season, when hatchlings from the record breaking 2003 hatch attained legal size.

While it wasn’t necessarily a surprise, it was certainly a very welcomed event.

But the real bombshell came out of left field during the late summer and fall months of 2018.

Before we get there let’s back up to the spring months, as the 2018 season was in its infancy.

After a winter warm up the fishing season on Lake Erie started with a bang. Pictures filled social media sites with coolers and livewells filled to the brim with walleye. But that excitement and productivity quickly faded as the calendar turned to spring and the weather turned back into a winter- like setting.  Cold temperatures, strong winds, and plenty of precipitation tormented anglers across the lake as they impatiently waited to get back on the water. This poor weather pattern muddied the waters of Lake Erie and nixed endless fishing adventures from late March through the middle of April.

The nasty spring weather brought many anglers across the lake to write the 2018 walleye spawn off as a lost cause. After all, there was no way that all those hatchling walleye could survive such harsh, perhaps even brutal conditions, right?

So, as the summer wore on many across Lake Erie weren’t even considering what the outcome would be from the spring’s hatch. Because most already assumed and had taken for granted it was going to be a total failure.

But once again mother nature, and Lake Erie in particular, proved that she doesn’t care what anglers, biologists, and Monday morning quarterbacks have to say about the lake’s spawning success or lack thereof. She will have the final say, this time, and every time.

As anglers began perch fishing and researches began their annual trawls, they both noticed a strong trend; young of the year walleye were not only prevalent, they were overwhelmingly abundant. Perch fishermen were sometimes reporting catching 40 to 50 ‘spike’ walleye on a single fishing trip. During the same time period biologists were pulling trawl nets across the shallow depths of Lake Erie. The results were startling, with numbers not seen since the record-breaking hatch of 2003. Some trawl sites even surpassed that of 2003.

But what makes this year class so noteworthy may be the underlying landscape of the time. Unlike the 2003 walleye hatch (which came at a time when it was desperately needed as the lake wide walleye population had begun dropping quickly), Lake Erie was already teeming with a huge walleye population prior to the 2018 hatch.

This could be the catapult into something very special, perhaps even unprecedented, in the seasons to come.

Not only was 2018 one for the ages in terms of fishing success, it may be seen as the year that put Lake Erie into another category all together. Some reports are even suggesting that there could be as many as 140 million legal sized walleye lurking around Lake Erie within a few seasons.

Those are levels never seen before, not even during the fishery’s heydays of the 1980s.

If those prediction even comes close to fruition the nickname ‘walleye capital of the world’ won’t even do Lake Erie justice.

But are there any potential downsides to such an amazing walleye population?

While most would argue that there could never be ‘too many’ fish on any lake, basic biological principles would argue against that.

No matter what type of population you are dealing with, there is a maximum carrying capacity that the habitat can support. It doesn’t matter whether you’re dealing with Grizzly Bears in the Alaskan wilderness or Killer Whales in the ocean, there are only so many resources to go around. If that carrying capacity is exceeded, it begins to put stress not only on the species in question but also the entire ecosystem.

If the population gets too out of hand it could collapse entirely.

If you doubt the validity of this statement, look no further than the Salmon fishery of Lake Huron from 2003 to the present. For those unfamiliar, Lake Huron’s Chinook Salmon population ballooned so quickly that it decimated the lakewide forage base causing a near total population collapse of the both the predator and prey species. The fishery never recovered.

While we certainly aren’t suggesting that Lake Erie’s beloved walleye population is headed for a collapse, there are certain questions and concerns that should be addressed.

As the walleye population has begun to climb recently other species have seemed to falter. Native white bass are still out there, but seemingly not in the numbers that they were in less than a decade ago. Along with that, important forage fish in Lake Erie such as the Rainbow Smelt and Emerald Shiner have decreased noticeably in population since the large walleye hatches of 2014 and 2015.

Not only are Emerald Shiners an important prey species, they are an important as use by Perch anglers for bait. And most fishermen and bait shop owners can attest to how difficult it has been to find this highly sought species in recent seasons.

While some may quickly point out that late summer algal blooms could be the driving force in this, it would be foolish to ignore the potential impacts of millions upon millions walleye and perch hatchlings preying upon these prey fish populations.

But what can we do about that?

While the effects of a rod and reel on an ecosystem the size of Lake Erie are likely to be minimal at best, we need to do our best to manage this amazing resource through its ups and downs. With that said, it may be time to reassess the size and quantity limits in each state. If walleye populations continue to rise there will certainly be stress put upon many areas of the food chain.

It is our duty as anglers to push our biologists and fisheries managers to make the best decisions for the betterment of game fish populations of Lake Erie. Not only for now but long into the future as well.

Okay, enough technical stuff already, what about the fishing in 2019?

There really shouldn’t be much change in the fishing this year. The good to great hatches from 2014-2016 should dominate the fishery with plenty of walleye in the 16-21 inch range all around the lake.

But the monstrous hatch of 2018 may start to become a slight nuisance as they begin to aggressively feed on small prey fish and the artificial lures that imitate them. These fish, typically referred to as ‘spikes’, will be in the 5-9 inch range and while they typically will not attack larger body baits they certainly will not hesitate to go after smaller minnow-like trolling spoons. It shouldn’t be anywhere near the constant sorting of undersized fish we experienced in 2016 and 2017, but it will almost certainly be an uptick over the phenomenal 2018 season.

Overall it should be another great walleye season on Lake Erie with plenty of full coolers and limit catches from all areas of the lake.

While not much has been said about the perch fishing, the last 6 spawning seasons for yellow perch (2013-2018) have all had fairly decent levels of success in Lake Erie’s western basin. Although they haven’t been the huge booming hatches that the walleye have experienced, they have been enough to sustain the Yellow Perch population into the near future.

While the perch fishing in the 2018 season wasn’t quite what it had been in the previous years it was still a very productive and enjoyable season. We’re confident that this year and the coming seasons will offer more great perch fishing action across the lake.

No matter what your desired freshwater game fish is, Lake Erie will certainly offer an ample shot at having a great day pursuing it. And the next few years may be some of the best fishing yet. No matter how you do it, now might be the time to start planning your next fishing trip! 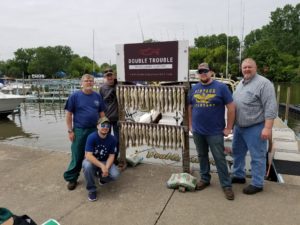