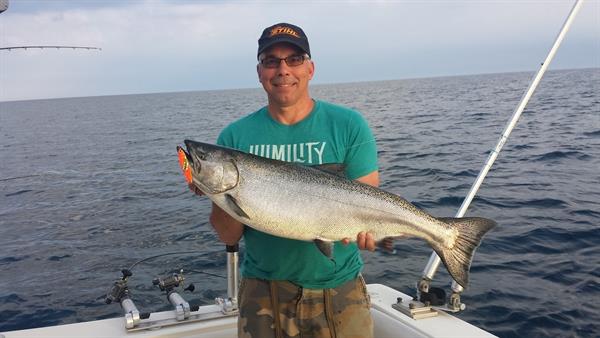 What a wild ride it has been for fisherman across Lake Michigan in recent seasons. From fast paced action with smaller than normal mature King Salmon, to slower catch rates on abnormally large Kings, to seemingly everything in between; fishermen have certainly had a lot thrown at them in recent seasons. But the dramatic shifts in fishing can only be outdone by the drastic changes in weather. The winters of 2014 and 2015 brought extreme cold and near record ice cover to the Great Lakes, followed by the mild winters of 2016 and 2017 which saw prolonged warm stretches with very little ice cover. While accurately predicting the long range outlook of the Lake Michigan salmon fishery may be futile, one thing remains all but a guarantee; Mother Nature will do her best to keep us on our toes.

As we’ve done in recent seasons, we’ll take a peek back at the past in order to try to come up with a reasonable expectation for the coming season.

First off, how was the fishing on Lake Michigan in 2016? Answers to that questions will vary widely depending on who, where, and when the question was asked.

From the start of our season in St Joseph, Kings appeared to be scarce but those that were caught appeared to be healthy and well fed. While it seemed like on any given day you could likely take a few Kings near the St. Joe pier head, they never seemed to materialize in any significant numbers. To make matters more difficult, repeated April and early May cold fronts brought strong northerly winds and constantly churned the water up in the southern end of the lake delaying the spring warm up. Due to this we spent most of our spring salmon season targeting Coho Salmon which were abundant in the offshore waters, along with a mixture of Steelhead and Lake Trout.

The word was the same across most ports on the Michigan side of the lake. King Salmon were few and far between, and in some areas seemingly nonexistent. Due to this most fishermen were targeting Lake Trout which were prevalent around nearshore structure foraging on Round Gobies and Alewife, or Coho Salmon which were found in good numbers offshore preying on Bloody-Red Mysid, a shrimp like invasive species.

Then in mid-May the weather finally stabilized, and with the nice weather a push of Alewives and Chinook Salmon made their way into the shallow waters near the Michigan shoreline. While the numbers weren’t record breaking, there were certainly enough around to keep anglers interested. And furthermore, the size of the Kings was impressive after 2 seasons of smaller adult fish. As the calendar turned toward June, there was new hope of a productive Lake Michigan salmon run later in the summer.

But that hope quickly dissolved. Not long after showing up the Kings seemed to slowly fade away. And the Coho that were so abundant offshore simply got to too far out of reach. Fishing for salmon got tough for many ports on Lake Michigan.

That is unless you were fishing the waters off Illinois or Wisconsin.

If you were lucky enough to be fishing on Lake Michigan’s western shore from early June through mid-July, you likely experienced some fantastic fishing for King Salmon, Coho Salmon, and Steelhead. Ports from Waukegan, Illinois all the way to Manistique, Michigan in the southern Upper Peninsula were reporting some of the best fishing action they had seen in years.

But while those areas were seeing fast paced action, anglers in other ports were struggling to find fish. Michigan’s traditional summertime King Salmon hotspots from Grand Haven to Frankfort were yielding paltry catches. Most savvy anglers and charter captains were targeting Lake Trout, just to have a better chance at getting a decent cooler of fish.

Some Michiganders pondered whether or not we’d have a return of King Salmon at all in 2016. But by late July, things started to balance back out. More and more adult King Salmon started to show up near Michigan ports. It surely wasn’t a banner year, but there were isolated pockets along the coast that produced some pretty darn good fishing action. The key being that you likely had to travel to get to that action, even if it meant a 15 to 20 mile cruise to the fishing grounds.

Lake Michigan by the numbers…

When all was said and done there were definitely some positives to the 2016 Lake Michigan fishing season. While some fishermen proclaimed it the toughest season they’d seen, others reported a reasonable improvement over 2015.

Regardless of those opinions, there is little that can be disputed about weir returns. It was widely publicized that 2015 experienced the lowest Chinook Salmon returns in the history of the Lake Michigan salmon program. Returns were so low that the Michigan Department of Natural Resources had to scramble to the Swan River weir near Rogers City to be sure to make quotas for their annual egg take. After two back to back brutal winters, the low returns appeared to be yet another sign of the impending crash of Lake Michigan salmon fishery.

But once again life found a way.

2016 saw marked improvements in the Chinook Salmon returns across many of Lake Michigan’s tributaries. The Boardman River in Traverse City saw a near 700% increase in returns of Kings over 2015. The Little Manistee River was up close to 150%. On the other side of the lake Wisconsin’s Strawberry Creek weir was up 50% over the previous season.

And King Salmon weren’t the only species that saw a significant improvement. Coho Salmon returns at the Platte River weir were also up over 200% over the depressed totals of 2015.

While those figures are certainly very encouraging and even exciting, it’s important to realize that the returns in 2016 were still below long term averages. It definitely shows progress, but we’re definitely not out of the woods yet.

To take the numbers game a bit further, there is increasing evidence that Lake Michigan is shifting towards a Chinook fishery that is dominated by fish that aren’t even reared in a hatchery at all. A recent study by the U.S. Fish & Wildlife Service has shown that the majority of fish caught by anglers in recent seasons are ‘wild’ fish that were naturally spawned in a Lake Michigan or even Lake Huron tributary. According to the data, 71% of fish caught in Michigan waters during 2014 and 2015 were of ‘wild’ origin, while only 7% were stocked in a Michigan tributary. The remaining 22% were stocked either in Wisconsin, Illinois, Indiana, or Lake Huron.

While that information certainly points to an ecosystem attempting to manage itself, it doesn’t come without variations. There have been wide ranges in the amount of wild Chinook smolts produced in Lake Michigan in recent years; ranging from as few as 1.4 million to as many as 6.6 million. So while we must be thankful for natural reproduction, we must also be mindful of the ups and downs that the fishery will inevitably see because of it.

Putting it all together…

So what does it all mean? With the combination of 2 warm winters and evidence of a few closer to average alewife hatches behind us, there is hope on the horizon. Furthermore, the estimated 2.9 million wild Chinook Salmon that entered the population in 2014 was much higher than the bleak 1.4 million from 2013. Those fish, now age 3, should make up the bulk of our adult catch in the coming season. Let’s hope they’ve been well fed!

Regardless of the data overload, anglers need to keep their expectations in check. Signs certainly point to a slight improvement to the King Salmon fishery in 2017, but those waiting on the return of the good ole days are likely to be disappointed.

The truth is that the ‘new’ Lake Michigan is one that requires versatility, flexibility, and possibly even a little bit of stubbornness. As fishermen we must be opportunistic and take the best option that is given to us.

While most would prefer a healthy box of Kings every time onto the water, that simply isn’t likely to be a feasible reality right now. At least not from a single port over the course of an entire season. On days when it just isn’t in the cards, other viable options need to be considered. Maybe instead of struggling to find a few Kings, we’d be better off heading offshore and targeting Steelhead and Coho Salmon. Or if that hasn’t been productive lately, perhaps it’s time to switch gears again and find some Lake Trout. While Lake Trout certainly don’t hold the title for the sexiest game fish in Lake Michigan, their predictability can be much welcomed after a tough day of searching for those ever nomadic silver fish.

But when the time is right we also might have to accept that traveling a long distance to get to the hot action is the only way to get the results we’re after. With the current depressed population of King Salmon and Alewife in Lake Michigan, the nearshore waters simply aren’t flush with activity up and down the shoreline the way they may have been in the past. If word has it that fishing is pretty good 20 miles down the coast, your best bet is probably to hit the fuel dock and get ready for a long boat ride.

That truly is the most simple and best advice that we can offer. There will be good days and tough days, just remember above all to be safe and enjoy the ride.

It seems like the more data that is presented each year about this fishery, the more questions this information creates. As another Chinook stocking cut looms on the horizon, there is a heated debate on what should be done to best manage the fishery. Some are drastically opposed to cutting stocks of Chinook at all, while a few are even pushing for significant increases. Others are calling for the complete cessation of Lake Trout plants and yet others agree with the science and prefer a conservative approach as the best option to avoid a Lake Huron type salmon collapse.

But the unavoidable truth may be that none of these options are in our control, no matter how much they appear to be. As we continue to shift toward a fishery dominated by those aforementioned ‘wild’ fish, we have to accept that the stocking cuts or increases may just be a drop in the bucket and insignificant to the overall big picture. The reality may very well end up being that the fate of our beloved Lake Michigan Chinook is almost solely in the hands of Mother Nature and powers beyond our grasp, whether we like it or not. And she will likely have the final say in what happens.

At the end of the day, that may in fact end up being the best option of all. Because after all, life has a knack for finding a way.

As always, the only way we’ll know how the season will go is to ride out each wave, take what’s given to us, and simply do our best. We hope to see you out there and latched on to a big one.