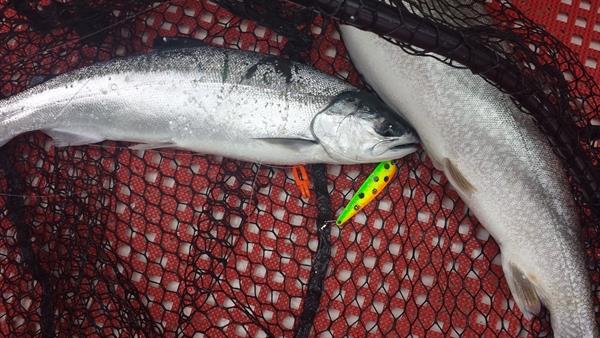 Like many things in life, the Lake Michigan ecosystem is in a constant state of flux and evolution. Those who have been lucky enough to fish this Great Lake over the years have certainly seen those changes firsthand. With so many variables involved, making a prediction into the future is no easy task, but we’ll do our best to gaze into the crystal ball.

As we’ve done previously we’ll try to analyze the past to help us better understand where the future may find us.

If you take a snapshot of the 2005-2012 timeframe, those fishing for Chinook Salmon on Lake Michigan likely saw the best action for these fish that has ever been experienced anywhere on the planet. Yes, that’s right it, we said best ever. While the fish may not have rivaled the size of the giant ‘Tyee’ of the Pacific Northwest or even their cousins in Lake Ontario, the quantities in Lake Michigan simply could not be beat. Year after year recreational fishermen and charter customers were spoiled with amazing action which usually resulted in coolers overflowing with 12 to 24 pound King Salmon.

But the real question is, was that level sustainable?

Anyone familiar with Chinook Salmon know that they are ferocious eaters. They spend their entire open water lives in search of baitfish to feed their never ending appetite. But the unfortunate truth is that these fish are solely pelagic feeders, meaning their biological makeup restricts them to feeding on suspended baitfish. They don’t typically forage on insects hatching on the water’s surface or on species that hover near the lake’s bottom.

That niche has been filled for 50 years by the Alewife, a small fish in the herring family that is native to the Atlantic Ocean, which invaded the Great Lakes over a century ago. For decades they thrived in the Lake Michigan environment by outcompeting native species, but in recent years they have been in decline.

The reason is two-fold. First, predation on Alewife by a large population of Chinook and other Salmonids has caused a decline in population, but the bigger issue has been with the invasion of Zebra and later Quagga Mussels. These species have put a great amount of pressure on the bottom of the food chain by constantly consuming Zooplankton, Phytoplankton, Mysis, and Diporeia. These species, which make up the backbone of the diet of Alewife, are now not as readily available as they had been in the past. The result is simple and predictable: less Alewife in the system and in turn, less Chinook Salmon to feed on them.

Despite the lower Chinook numbers the situation isn’t a completely dire one if the big picture is taken into consideration.  First off the natural reproduction of King Salmon has actually slowed in recent seasons, showing signs that the population may be coming to a symbiotic balance with the environment. This is something that didn’t happen prior to the crash on Lake Huron. The wild card of course is the Quagga Mussel population, and how strong of a hold they will have on the system going into the future.

Furthermore, there is evidence that other species are adapting to the change quite well and in fact thriving. Native Lake Trout, along with planted varieties of Coho Salmon, Rainbow Trout (Steelhead), and Brown Trout are finding creative ways to supplement their diet. While all Salmonid species will readily prey on Alewife when they are available, only the Chinook have a diet that is restricted to the pelagic part of the water column. The other species are content foraging both on insect larvae on the lake’s surface and on Round Gobies which have become very prevalent on the lake’s bottom.

So what does it all mean?

For the near future it appears that Lake Michigan is destined to see a lower Alewife population and as a result a lower Chinook Salmon population. Despite this, the population of other species appears to be strong. Whether or not the heydays of the King Salmon will return any time soon to Lake Michigan is something that only time will yield the answer.

Those who wish to remain successful on the ‘big’ water will need to keep an open mind and a versatile attitude. There is no problem chasing Kings when they are readily available, but when they aren’t, other species will have to make up the bulk of the catch. The reality is that catching 20 mature Kings in a few hours of fishing can’t be expected, even on the best of days. If a box chock full of Kings is all that will satisfy your desire, it may be best to re-evaluate your expectations. But if you are willing to put in the time and effort, great multi species catches can be had from many ports across the lake.

From our perspective we’ll continue to do what has made us successful in the past; an honest attitude, a hard working effort, and an open mind. As the Lake Michigan ecosystem continues to evolve, we’ll reassess our situation and locations annually in an attempt to make whatever changes we feel are required to give our customers the best experience possible.