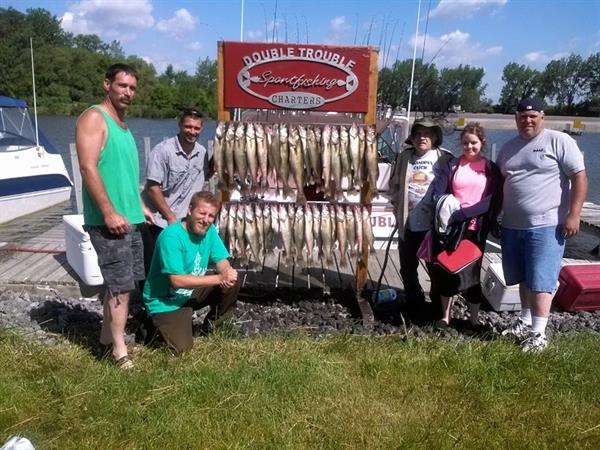 Another open water season is underway across Lake Erie, but over the last few seasons anglers haven’t needed to wait for ice out to fill their coolers. The massive walleye hatch of 2003 has grown to a mature age while slowly attaining trophy status. Each winter they converge on the western basin of Lake Erie, eager to complete their annual spawning ritual. Those brave enough to endure the cold temperatures have been successful, as the last two winters have provided fishermen with ample ice to pursue these toothy critters.

But aside from the ample supply of trophy walleye from a hatch over a decade ago, anglers have much to look forward to according to Jeff Tyson, the Lake Erie fish management program administrator for the Ohio Division of Wildlife.  And that excitement should extend beyond the upcoming season and well into the foreseeable future. That is because there has been over a decade of fair hatches since 2003 that have helped contribute to a very sustainable fishery. “We’ve had a string of moderate walleye hatches contributing to the age diversity of the walleye population, resulting in increased fishery performance,” said Tyson. “That’s good for the population and for Lake Erie fishing. The younger walleye don’t migrate as far as the older fish, providing good fishing in the Western Basin and Central Basin of Lake Erie.” That is great news, as those targeting walleye in all areas of the lake should have great fishing opportunities over the coming seasons.

And some of the best news hasn’t even become visible yet. That great news: the 2014 walleye hatch was fantastic. “The 2014 Lake Erie walleye hatch was the best we’ve seen since the enormous hatch of 2003” said Jim Dexter the Chief Fisheries Biologist for the Michigan Department of Natural Resources. Although highly optimistic, he warned that the hatch was great, but shouldn’t be compared to the record setter from 2003. Although these fish won’t reach the legal size of 15” for Michigan and Ohio fishermen until the 2016 season, it still proves the lake remains a very healthy and productive ecosystem.

With many age classes readily available, the next several years should provide great walleye action whether you are looking for trophy class fish or a cooler full of ‘eaters.’

Along with the great outlook for walleye fishing, the yellow perch forecast is also optimistic. Perch anglers should encounter an abundant number of fish from hatches of 2007-2013, with the larger fish being more prevalent in the Central and Eastern parts of the lake.  And much like the walleye hatch, the 2014 yellow perch hatch provided more fantastic news for the future.  “This year’s Western Basin perch hatch is the fourth best since we began keeping records in 1987,” affirmed Tyson. “With two back-to-back good perch hatches, the perch fishing should start to look up a bit over the next couple of years.”

All things considered we’re expecting another great year for both walleye and perch on Lake Erie, and it looks like we will have many more to come in the future. If you’ve never experienced this amazing fishery, give us a call to get in on the action!

We’ll see you on the water.

When The Sun Climbs High, Go Deep For King Salmon